One of the most frequent questions we've been asked since the launch of Sprott Physical Uranium Trust is: What about the controversy over radioactive waste disposal, specifically spent nuclear fuel?

First, a quick overview. Radioactive waste is a byproduct of the nuclear power cycle and is considered the tail-end of the process, as shown in Figure 1. The waste from nuclear power generation is classified according to radioactivity as either low-level (LLW), intermediate-level (ILW) or high-level waste (HLW).

Compared to other energy sources, only a small amount of waste is produced from nuclear power. According to estimates, the total waste from a reactor supplying one person's electricity needs for a year would be about the size of a brick. Only five grams of this is high-level waste (HLW) — the same weight as a sheet of paper.1

Most Nuclear Cycle Waste is Low in Radioactivity

Most nuclear industry waste is relatively low in radioactivity and comprises approximately 90% of the total waste volume (but just 1% of the radioactivity). This includes uranium mill tailings and the tools, protective clothing, and the other equipment used at nuclear fuel processing facilities and power plants. LLW is generally disposed of in impoundment waste disposal areas and is strictly regulated.2

On the other hand, high-level radioactive waste accounts for approximately 3% of the total waste volume and 95% of the radioactivity in the nuclear waste. It's what keeps people up at night and includes2:

In the global effort to lower carbon emissions, nuclear power provides a critical contribution to environmental goals. Fortunately, the nature of spent nuclear fuel is far less threatening than the average person might assume.

Let's dive into some of the key characteristics of spent nuclear fuel to demystify the issues around safety, storage and disposal.

1
SNF is not mysterious.

The science of nuclear fission has been well understood for nearly nine decades. That includes the properties of spent fuel and other radioactive waste generated in transforming mined uranium into fuel and fuel into commercial electricity. Of all the types of radioactive waste generated by hospitals, research facilities or power plants, spent nuclear fuel presents the highest levels of radioactivity and heat as the material decays.

In U.S. nuclear facilities, after being used to generate electricity, spent fuel rods are moved to cooling ponds located on-site near the reactor. In steel-lined concrete pools of water, spent fuel rods cool and decay to levels that make them safer and easier to transport or process. 3 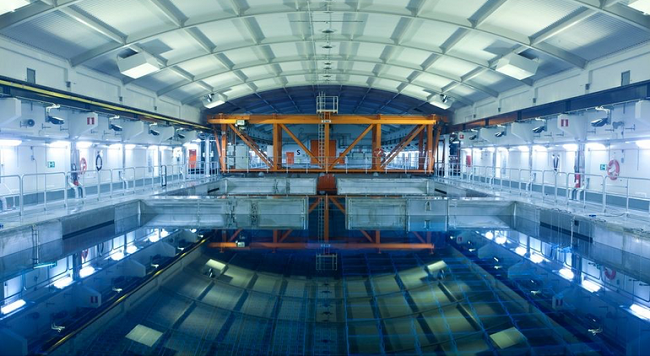 "Storage ponds at reactors, and those at centralized facilities such as CLAB in Sweden, are 7-12 meters deep to allow the racked fuel assemblies to be covered by several meters of water. The fuel assemblies are typically about four meters long standing on end. The multiple racks are made of metal with neutron absorbers incorporated in them. The circulating water both shields and cools the fuel. These pools are robust constructions made of thick reinforced concrete with steel liners. Ponds at reactors may be designed to hold all the used fuel for the life of the reactor, but usually the design assumes some removal of cooled fuel for reprocessing or to dry storage." 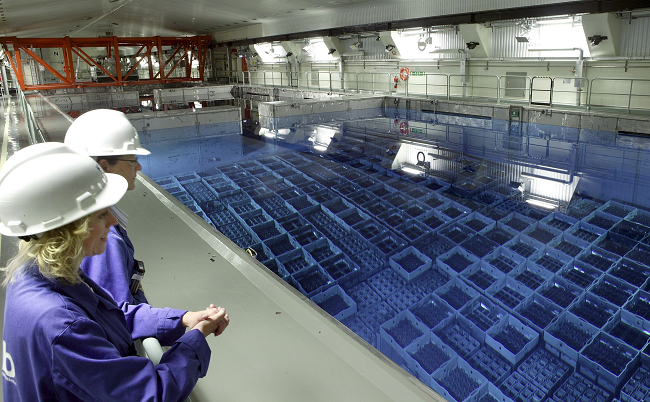 After a year or more in a cooling pond, spent fuel rods are moved to dry storage casks sealed in steel cylinders and then embedded in concrete or more steel. Several storage cask designs are in use across the 76 reactor or storage sites in the U.S. where spent fuel is in interim storage.

2
SNF has not been a source of accidents.

Though accidents have been rare in the long history of nuclear technology, the few adverse events are understandably well known (Chernobyl, Three Mile Island, Fukushima) — yet it's worth recalling that none of these incidents involved spent fuel or other forms of radioactive waste.

Even in the most recent reactor meltdown in Fukushima Prefecture, Japan, following a 2011 earthquake and tsunami, spent fuel stored in cooling ponds on-site never leaked radiation or otherwise contaminated the environment, workers or nearby population.

The nuclear fission process results in two different kinds of radioactive waste in spent fuel. First, it creates radioactive isotopes lighter than uranium, namely cesium-137 and strontium-90, which generate most of the heat and penetrating radiation in the spent fuel. These lighter isotopes have a half-life of about 30 years, declining very quickly in radiation levels over time, as shown in Figure 3.

The nuclear reaction also leads to the formation of plutonium as some uranium atoms pick up stray neutrons produced in the fission process. Plutonium is not responsible for most of the penetrating radiation or heat in spent fuel, but it has a much longer half-life of 24,000 years. 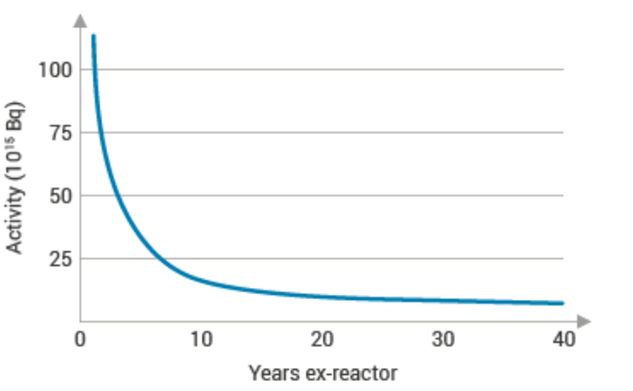 The U.S. does not currently recycle spent fuel. However, some countries reprocess spent fuel to capture the unused uranium and plutonium. In fact, only about 4% of potential energy is captured from uranium fuel on the first use. France is an international leader in recycling spent fuel, which is an expensive process but offers dual benefits of capturing the energy potential still latent in spent fuel and in making the final waste product less radioactive and with a shorter total half-life, by orders of magnitude.

Small amounts of radiation are part of the natural world and do not present a threat to humans. Sunshine generates much of the radiation in day-to-day exposure and some building materials, including the bricks in our houses and decorative rocks in fireplaces, can contain low levels of radiation.

Chemical reactions of fossil-fuel plants release more radiation into the environment than the operation of nuclear energy plants —  10 times more. Living near a nuclear power plant is estimated to expose people to only 1-2 millirems (mrem) of radiation over a year while living near a coal-burning plant exposes surrounding populations to about 20 mrem. In comparison, exposure is about 42 mrem from a mammogram, 80 mrem from living at the elevation level of Denver, Colorado, and about 228 mrem from the radon in a typical American home.5

5
SNF is more limited in volume (and external costs) than fossil fuel wastes.

The simple volume of solid waste from spent nuclear fuel is surprisingly low. Since nuclear energy began in the U.S. in the 1950s, the cumulative total volume of spent fuel is about 83,000 metric tons, which would fill just one standard U.S. football field at a depth of 10 yards.3

It's also crucial to remember that the waste generated by nuclear power is fully accounted for and incorporated into the production of the electricity – no externalities. By contrast, fossil fuels release vast amounts of pollution in the form of CO2 emissions to be dealt with at the expense of the general public in the present and for generations to come. And climate change is proving to be enormously difficult to address.

What's Next for Spent Nuclear Fuel?

Engineers have safely managed the disposal of spent nuclear fuel for many decades. The true difficulty with SNF appears to lie in the political nature of the problem of permanent storage. What's more, spent fuel in the U.S. represents potential energy; new research and development for small modular reactors (SMRs) is actively exploring technology that would re-use spent fuel, a process that would drastically change the radioactivity profile of solid waste at the end of the electricity generation cycle.

The U.S. Government Accountability Office (GAO) recently released four recommendations to Congress for policy changes regarding spent nuclear fuel. Though none of the changes would resolve the stalled plans for a deep geological storage location in the U.S., they would represent substantial progress in aligning funding with a permanent solution and opening up interim options for the SNF currently in storage.

Whether it's policy changes or technological innovation that will resolve the impasse around SNF, the discussion should always return to the simple characteristics of SNF that we have outlined here. Fortunately, interim storage solutions are stable and reliable until the longer-term plan is resolved in the U.S.

Since nuclear energy began in the U.S. in the 1950s, the cumulative total volume of spent fuel is about 83,000 metric tons, which would fill just one standard U.S. football field at a depth of 10 yards. 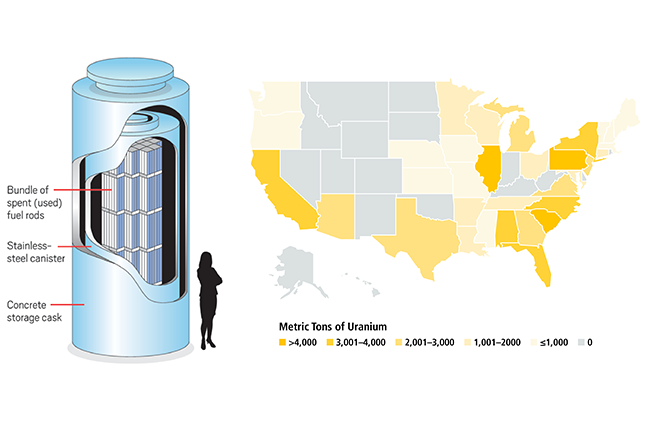 Past performance is not an indication of future results. All data is in U.S. dollars unless otherwise noted. The information provided is general in nature and is provided with the understanding that it may not be relied upon as, nor considered to be tax, legal, accounting or professional advice. Readers should consult with their own accountants and/or lawyers for advice on their specific circumstances before taking any action. Sprott Asset Management LP is the investment manager to the Sprott Physical Uranium Trust (the “Trust”). Important information about the Trust, including the investment objectives and strategies, applicable management fees, and expenses, is contained in the Management Information Circular and the Prospectus. Please read the Management Information Circular and the Prospectus carefully before investing. You will usually pay brokerage fees to your dealer if you purchase or sell units of the Trusts on the Toronto Stock Exchange (“TSX”) or the New York Stock Exchange (“NYSE”). If the units are purchased or sold on the TSX or the NYSE, investors may pay more than the current net asset value when buying units or shares of the Trusts and may receive less than the current net asset value when selling them. Investment funds are not guaranteed, their values change frequently and past performance may not be repeated. The information contained herein does not constitute an offer or solicitation to anyone in the United States or in any other jurisdiction in which such an offer or solicitation is not authorized or to any person to whom it is unlawful to make such an offer or solicitation. Views expressed regarding a particular company, security, industry or market sector should not be considered an indication of trading intent of any investment funds managed by Sprott Asset Management LP. These views are not to be considered as investment advice nor should they be considered a recommendation to buy or sell. 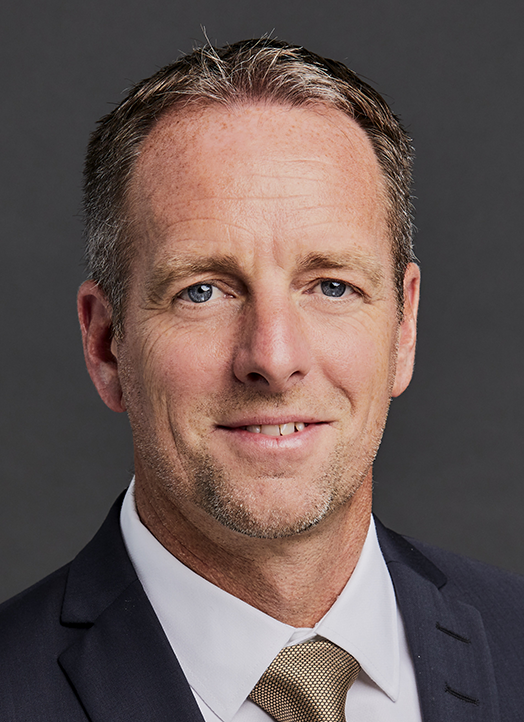 Per Jander
WMC Energy, Technical Advisor to Sprott Physical Uranium Trust
Read Full Bio
Why Do We Fear Nuclear Power? Fear of power in any form, and those who wield it, is quite deep in the human psyche....with the dropping of the first atomic bomb on Japan, nuclear power came to be associated with the dark side of power technology.6